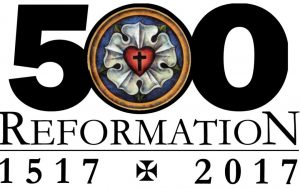 In 1995 Eileen and I traveled to Europe for what we still remember as one of our best vacations ever. Before the official “vacation” started, we spent a week in Berlin. Eileen was an Assistant United States Attorney at the time, and she received an official military escort so that she could take several depositions related to one of her cases in Germany. While Eileen practiced law, I took advantage of my train pass and visited many of the church history sites within reach.

Of course I went to Wittenberg. This Sunday I’ll show you a photo of me at the famous “door” where Martin Luther nailed his 95 theses in 1517. In fact, at First Baptist Paducah, we’re going to celebrate the 500th Anniversary of the Protestant Reformation! Don’t miss it.

After Eileen finished all of her responsibilities, we headed out for the international city of Geneva, Switzerland. In the old city, there’s a beautiful park adjacent to the University of Geneva. It’s close to the church where John Calvin preached and taught every day. In the park is an impressive wall-like memorial to the Reformers of the 16th century: Calvin, John Knox, Huldrych Zwingli, Theodore Beza, and others. And, chiseled into the stone, are the Latin words Post Tenebras Lux. “After darkness, light!”

And that’s exactly why I want our church family to recapture the spirit of the Reformation. During the Middle Ages, the gospel of Christ was nearly lost. The light of Christ was eclipsed, and – as a result – many people lived in spiritual darkness. What we now know of as the doctrine of justification by faith alone was on the brink of extinction. Friends, I fear that we live in such a time today. Many “churches” no longer preach the gospel, and many others have wandered so far from Scriptural truth that the gospel is barely recognizable. We need another Reformation.

The Reformation was a firestorm – a firestorm in the form of a recovery of what the Bible had said all along. But it was far from easy. There is always tremendous opposition to the truth. The most volatile issue ever debated in church history surfaced: how are sinful people reconciled to a holy God? The church had faced severe crises in the past, but this topped them all.

What God did then – and what I pray He’ll do now – was raise up powerful voices to expose the darkness for what it was. Not the darkness in the culture, mind you, as much as the darkness in the church. That’s where the good news of Christ’s gospel is recovered, really. Not in the White House, or in the Senate chamber, but in the pulpit.

What I’m saying is this, friends: we still need Reformation! I would contend that Reformation always precedes revival.

Why don’t we pray for both?