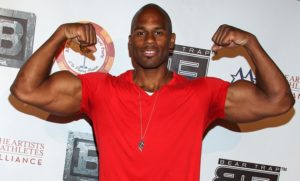 The tragic scene early Wednesday morning was on L.A.’s Venice Beach, where the body of pro wrestler Shad Gaspard had washed ashore. Last weekend, Shad was caught in a rip current about fifty yards from the beach. A wave swept over Shad, and it was all over. He was never seen alive again.

As I read the story, my heart sank.

Because it was my story.

Except that I’m still here.

When I was 15, I was enjoying “Las Playas” in Acapulco, Mexico, swimming in the cold Pacific with my father and sister. We were having the time of our lives and paying little attention to the red flags dotting the hot, sandy beach. Red meant “peligro” (“danger” in English) – and for a sane person it would have meant “no swimming” – but what teenage boy doesn’t feel a certain sense of invincibility? In fact, if I had any real worry at all that afternoon, it was for my sister.

In the blink of any eye, a wave that I never saw coming crashed over my shoulders, and I was under the water. It felt like a thousand arms were grabbing me from every direction. The force was so intense that I knew that fighting it would be futile. And even though this all happened within a few seconds, my memories of that day and those moments are crystal clear. I suppose I’ll never forget those powerful seconds.

My life passed before my eyes, just like in the movies. It was exactly like that. I saw quick mental snapshots of who I was, and of a couple of things that were important to me, but I was absolutely certain that I was going to drown. There was no doubt about it. I didn’t even try to swim, or to pull myself up. It was like I was frozen and held motionless, except that I could tell that I was being moved further and further from the shore, because I could feel the momentum of the unstoppable pull through those dark waters. I even saw, in my mind’s eye, my obituary and the accompanying photograph in the newspaper. I could not breathe because my head never came above the water.

Three hundred and fifty yards offshore, the “undertow” (that’s what we called it back then) spat me out just as quickly as the fish that followed Jonah upchucked the reluctant prophet. Every powerful arm below me released me. I could breathe.

By then I had time to be afraid. I felt like I had been zapped by a sedative or a surgery, and I knew that I couldn’t swim all the way back to the beach. I could, but I felt like I couldn’t. Then I became convinced that a hungry shark would have me for an appetizer within minutes. (I’ve always had a love-hate relationship with those creatures.) But I swam. Slowly and cautiously.

Before long, I was visible to some lifeguards, who met me in the water. The trepidation eased. It was over.

No, it wasn’t over, and that’s my point.

In the mercy of God, He gave me more time. Time in fact that would be necessary for me to know Christ, and to profess Him as Savior and Lord. Time to reach legal age and go to college. Time to get married and have a son. Time to preach the gospel. Time. The Lord gave me more time.

Shad Gaspard did not survive the ocean, but I did. And we all know that was no test of physical fitness.

Perhaps more than anything else, the Protestant Reformer John Knox is remembered for his bold prayer: “Give me Scotland, or I die.” John’s prayer was not an arrogant demand, but it demonstrated the substance of the ministry to which Knox desired to spend the remaining energy of his life. All threats by opposing forces aside – he had been imprisoned and enslaved – John was willing to die for Christ’s truth.

If you’re reading this, you, too, have been given more time.

Will God use you to revive a nation?

Will God use you to give hope to a tired church?

Will God use you to pray for those who need to experience forgiveness and grace?

It can get exhausting but don’t lose heart. The ultimate danger is that you and I will give up. We can’t let that happen, because there’s still time. Very valuable time.

When you think about it, please pray for Siliana Gaspard, Shad’s wife, and for Aryeh, their 10-year-old son who was swimming with his dad when the riptide struck. They need our prayers.