Of Ferdinand and Freedom

Almost simultaneous with the outbreak of the Spanish Civil War, in 1936, The Story of Ferdinand was published. Written by Munro Leaf and illustrated by Robert Lawson, this timeless children’s tale is set somewhere outside Madrid. In a nutshell, Ferdinand is a bull, but Ferdinand is not interested in bullfighting. He would rather smell flowers. Expanding on the book’s principle theme, Disney released an animated short of the story in 1938, and a full-length animated film adaptation was released by Blue Sky Studios and 20th Century Fox in 2017.

Ferdinand is large and strong, and on one humorous occasion is mistaken for a ferocious bull. But in reality the banderilleros, the picadores, and the matador are unable to provoke him. 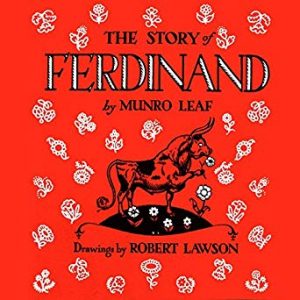 Ferdinand simply is not a fighter. In its earliest days, The Story of Ferdinand from multiple directions faced accusations of being a stealth political attack, but I think such assessments miss the point entirely. So here’s my take on it.

Boldness is a noble virtue, but sometimes the boldness we most need is the boldness to just be ourselves. God our Creator has granted each one of us a unique set of gifts, strengths, and abilities. These may be uncelebrated and even unnoticed, by us and others, so part of our Christian maturity is discovering who God designed us to be for His glory (Psalm 139:1-18).

Unless we have our Ferdinand breakthrough, we will never serve Christ the way we were designed to serve. Unless we experience some of Ferdinand’s freedom, we are likely to spend the rest of our lives trying to be somebody else.

Why? So we can serve one another in love (First Peter 4:8-11). So we can grow in unity, and in appreciation and respect for one other. So we can exalt Christ and His gospel in ways which would be impossible if we were not together in mission and ministry.

3 comments on “Of Ferdinand and Freedom”