Of Faith and Football

Much has been made recently of the violence of the game. I suppose that we could argue that concern one way or the other, but I doubt that our debate would drastically alter anyone’s love of the sport. Rodney Clapp writes in The Christian Century: “I’ll keep watching football not be­cause of the game’s violence, but because of its instances of (barely) avoided violence. That’s what gives the game its beauty and its thrills.” Almost everyone reading this knows something of the thrill of a Friday night football game. 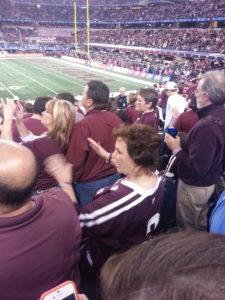 All the men on our pastoral staff have their NFL favorites, but I’m descended on my father’s side from a long line of die-hard Texas Aggies – for whom no game beyond the college level can ever satisfy like the maroon-and-white, over-the-top extravaganza that is a football game at Kyle Field. Those A&M military traditions are forever imbedded in my psyche, including all the songs and “yells” that make the environment electric with enthusiasm – and that regardless of the outcome. As my grandmother used to say after every loss: “We won the band.” Joshua and I went to the Cotton Bowl in Arlington last January, where the Aggies trounced Oklahoma, and were seated right behind Johnny Football’s grandma (photos from my phone included). More fun than anyone should be allowed to have in a single night.

What makes such a moment so memorable? It may well be, in large measure, the solidarity of both purpose and resolve.

In the days of the Roman Empire, a young commander of a “special forces” unit – Camidus was his name – met Jesus Christ and found his heart and life forever changed. The men in the unit were known as the Thundering Legion, and were greatly distinguished on the battlefield. Camidus shared his faith with his regiment, and all of the thirty-nine men under his command trusted Christ for salvation. This, as you might imagine, did not sit well with the Roman governor. When the men in the regiment would not turn from Christ and worship the idols of the Empire, all forty soldiers were stripped naked and marched out onto a frozen lake, and tied together with a rope to be left to freeze to death. The rope was tied loosely, so that any man could change his mind, renounce his faith, and be treated to a steaming hot bath where he could recover.

To the guard’s amazement, the chant actually grew louder and stronger. How could this be?

And as you might also imagine, our Sovereign Lord used the moment to convert the guard. Something only Jesus could do. The man stripped off his clothes and joined the others, shouting “I am a Christian!” And louder than ever the chorus rang out: “Forty soldiers, we stand strong in the strength of Christ and Christ alone.”

By morning’s light all forty men were dead.

In My Heart’s Cry, Anne Graham Lotz rightly observes: “In our God-blessed nation of America … no one is crucified or thrown to the lions or burned at the stake because he or she believes in Jesus as the only way to God. Yet the average church member seems to lack deep convictions concerning who Jesus is to the extent he or she cowers under a raised eyebrow, or a whispered innuendo, or a politically incorrect label.”

Maybe we enjoy football because of the purpose and resolve that we admire in others but all too often don’t see in ourselves. My beloved brothers and sisters, we have been  known and loved by One who is far more worthy of our passion and allegiance than a pigskin. Perhaps our solidarity will come when we lock arms for Christ’s gospel, and march out into the world as one body “full of grace and truth.”