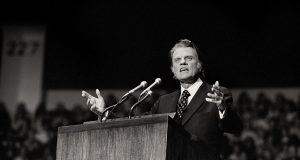 Over seven generations of ministry. Well done. Precious in the sight of the Lord is the death of his saints (Psalm 116:15).

As I write today, mourners have gathered in North Carolina to pay their final respects to the Reverend Billy Graham, after a week of tributes to “America’s Pastor.” Who among us has not been impacted by Billy Graham? I included a photo of my peeps, including my niece Briana who lives in Charlotte, while we were at the Billy Graham Library last spring. 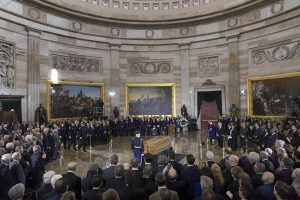 Graham was only the fourth private citizen in U.S. history to lie in honor at the U.S. Capitol. I am so glad. He represented Christ and our nation to the world. I was hosting a Romanian pastor for dinner last night, and he told me about a time when Graham preached in Timisoara. The Communists cut the wires to the sound system which was to broadcast the service to the overflow crowd, but the throng swarming outside the Orthodox cathedral began to sing and worship anyway.

For us, it is the end of an era. My grandparents were impacted. My parents. My generation, and my family. Both Eileen and I attended crusades years ago. While we lived in Raleigh, we were privileged to love a church full of people who loved Anne Graham Lotz. Anne – whom Billy called “the best preacher in the family” – had brought Bible Study Fellowship to our community. The men’s group met in the church I served as youth pastor. That’s when I remember seeing the Graham family up close and personal enough to know that they practiced what they preached. 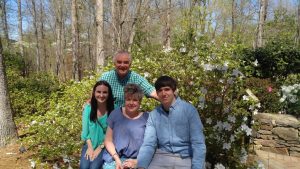 Even my son likes to listen to excerpts from Dr. Graham’s sermons. Gen-Z Joshua is drawn to Dr. Graham’s strong, compelling voice and his simple gospel message.

More than any other dimension of his life and ministry, I think that what I admired the most about Billy Graham was his humility. He lived on a reasonable salary, by choice. He made himself accountable to others, including his beloved Ruth. Billy recognized that the best of men are men at best, and he made every effort to safeguard against a scandal that would bring the honor of Christ into question.

Perhaps the best way for you and I to honor Billy Graham’s legacy is to share the gospel of Christ. Never forget that right now is the right time to do that, because “the buses will wait.”

Now, for Dr. Graham, none of those dignitaries matters. The global heads of state and the American Presidents from Truman to Trump, they are yesterday’s news. Billy Graham has seen Jesus. And Jesus is more than enough.

2 comments on “More Than Enough”