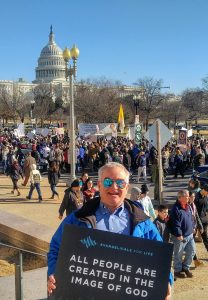 When slavery was legal in our land, many people could not imagine any other way of life, because slavery – as an institution – was so tightly woven into the fabric of our national psyche: socially, politically, and of course economically. It was hard for many people to see that it was wrong, because “that’s just the way it is.” We can translate that struggle into any chapter of history: when we’re in it, it’s difficult to see it clearly.

Maybe you’re depressed about life in America right now. Don’t be! There are lots of great things happening all around us. Our gospel is Christ’s gospel, and – as such – it is inherently full of hope. You and I must help people see not just the reality of what is, but the reality of what can be in our Lord Jesus Christ! The possibilities are endless regarding the many ways in which He might use us a light and salt in the land of the free and the home of the brave. Be encouraged!

A week ago today I was participating in the March for Life in Washington, D.C., as many of you know from social media. On the anniversary of Roe v. Wade, hundreds of thousands gathered for the largest annual human rights demonstration in the history of the world. As we made our way from (roughly) the Washington Monument to the U.S. Supreme Court – passing the Capitol as you see in my photo – I was overwhelmed with the magnitude of the pro-life movement in America. It is so much larger than simply making people aware of the horrors of abortion.

Followers of Christ are working passionately and strategically to honor God’s image in children and adults with disabilities, helping them thrive in the face of physical, cognitive, and even social difficulties. The body of Christ is actively engaged in the pursuit of racial reconciliation and social justice (in the purest sense of a term which has become highly politicized). Christians are pursuing gracious care for victims of Alzheimer’s and dementia. Our sisters and brothers in Christ are working to restore fractured families, and to help moms and dads provide financial, emotional, and spiritual stability for their children in all kinds of less-than-perfect situations. I’m also really happy to report that God has called a number of Christ followers to love those women who have made the choice to abort. Ours is not a ministry of condemnation, after all, but a ministry of healing, redeeming, and sanctifying grace.

One reason why the pro-life movement is growing is that we have truth on our side. The fact that life begins at conception is now indisputable. Dr. Bernard Nathanson, who presided over more than 60,000 abortions writes: “This person in the womb is a living human being and we could not continue to wage war on the most defenseless of human beings. Having looked at the ultrasound, I could no longer go on as before.”

I was particularly blessed by the ocean of young adults who walked with me. Young America, despite many other social problems, is increasingly pro-life. Sometimes I get the impression that many Americans view the pro-life movement as angry, militant, and ill-informed. Nothing could be further from the truth. What I observed, for hours on end, was a winsome, articulate, and joyful generation seeking to make a life-giving difference in the world.

As I came home to Kentucky, I was nearly immediately assaulted by the harsh reality of the Marshall County High School tragedy. We’re not “home” yet – that’s for sure. Our world is broken. But Western Kentucky is proving to be just as hopeful as Washington, D.C. – all you have to do is look around. Another ocean of young people is resolved to press on in prayer, unity, and – quite shockingly – gospel-centered forgiveness and grace. These are our neighbors and friends, and because Christ – the giver of life (John 10:10) – is alive and well, hope is here.

2 comments on “Hope is Here”