Eileen and I have been binge watching The Crown. We started late, so we had to get caught up. We’ve overachieved. We’ve run out of episodes. If you’re unfamiliar with this series, it’s an original on Netflix, and the most expensive television show ever made. For the most part it is historically accurate within reasonable bounds. (I’ve Googled at a few points just to make sure.)

Each episode presents a different challenge in the life and reign of Queen Elizabeth II, who assumed the British throne at the age of 25. I’ve particularly enjoyed the interactions with Winston Churchill, as both characters wrestle with the weightiness of their respective leadership responsibilities. (Don’t miss the one where the aging Churchill has to figure out if it’s time to resign. Rich with wisdom.) What has intrigued me is that no one is really “ready” for leadership – they just do it anyway. I suppose that the lesson for us is that leadership is learned in real time.

The Crown is a true tale of perseverance. Elizabeth (Claire Foy) is a lone female monarch within an established (to put it mildly) boys’ club. She is the epitome of virtue and restraint against the backdrop of a decaying culture and more than her fair share of womanizing fools. She presses on – contending with what must be a whole world of antagonistic emotions – as her private secretary brings her round after round of bad news, both nationally and personally.

Elizabeth navigates the deadly Great Smog of London (1952). She manages the international Suez crisis. She maneuvers around a revolving door of resigning prime ministers. She sticks with a husband who is at times more out than in – complete with nonstop rumor and embarrassment stemming from his shenanigans at home and abroad. And she consistently helps stabilize a sister whose life supplies enough drama for a whole troupe. Plus, nearly everybody has an opinion regarding how she could do it better. Elizabeth is velvet and steel.

One of the best shows features Queen Elizabeth’s friendship with the American evangelist Billy Graham. You can see on the Queen’s face that she is more than intrigued by Reverend Graham’s simple gospel message. Elizabeth happens to be in the throes of trying to forgive her uncle when Graham is in London preaching one of his famous crusades. We then see Graham preaching in Windsor Chapel, upon the Queen’s invitation, and then the pastor and Elizabeth discussing Scripture as it applies to the subject of forgiveness.

Quite astutely, and almost humorously, the Queen reminds the preacher that Jesus prayed for His enemies to be forgiven “for they know not what they do.” You can tell that Elizabeth is wondering if she has to forgive someone who sinned knowing full well what he was doing! She is obviously seriously pondering the claims of Christ on a personal level, which is not out of character for a woman whom we observe more than once kneeling by her bed for evening prayers. Though the head of the Church of England in title, role, and authority, the Queen clearly acknowledges in that episode that she is under the authority of Almighty God.

I appreciate The Crown’s respect for Christian morality, the traditional family, and even limited government. But what has drawn me in, perhaps more than any of the series’ other virtues, has been its emphasis on self-sacrifice. The crown worn by the Queen requires everything of her at one time or another. That’s just the way it is when you’re responsible. Since even a life of royalty is no rapid-fire succession of fairy tale chapters or even endings, The Crown is a beautiful reminder that we’re all in way over our heads.

Ah, Jesus! The sacrifice par excellence. “When all around my soul gives way, He then is all my hope and stay.” 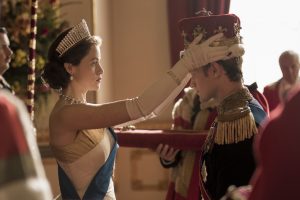 2 comments on “Hope and Stay”