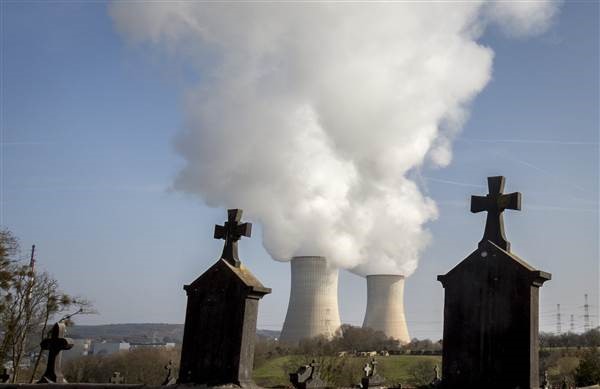 As part of a new nuclear energy plan, the Belgian government intends to issue iodine tablets to its entire population. After ISIS-linked terrorists communicated plans to build a “dirty bomb,” widespread fears were fueled. Again. Apparently a senior researcher at a facility in Belgium – a center which produces a significant portion of the world’s supply of radioisotopes – was spied upon by terrorist bombers. Ugh. All of this information was the fruit of a home invasion stemming from the ISIS attack in Paris last November. To make a long story short, the dirty bomb threat is also directly linked to the March attacks in Brussels.

Compounding these threats are fears over Belgium’s aging nuclear plants. Two reactors are 40-years-old. Though global experts are divided on the pros and cons surrounding potassium iodide distribution, the new plan is: give everyone a pill. Just in case.

We might or might not agree with Belgium’s pill plan, but I think we can all agree that the real power of a dirty bomb (even the threat of a dirty bomb) is its power to spread panic and fear.

I’ll remind you of C.S. Lewis’ The Magician’s Nephew – just in case it’s been a long time since you read it. When the great lion Aslan speaks to the creatures of Narnia, as well as the human children, everyone is comforted by Aslan’s strong voice. That is, everyone except Uncle Andrew. Says Aslan of Andrew: “I cannot comfort him … he has made himself unable to hear my voice. If I spoke to him, he would hear only growlings and roarings.”

In no way do I mean to minimize the viable threats against us on Planet Earth. From Sharia law to nuclear meltdown, we see symptoms of a broken world. But the Church has survived, and even thrived under hardship, and she will continue to press on! No opposing ideology will stop her. The Church survived the occupation of the Roman Empire, the bizarre Middle Ages, the brutal Nazi regime, and every other oppression in between. In the Middle East, particularly, Christianity survived severe Sharia law under oppressive Islamic regimes from the Eighth through the Fourteenth Centuries. Today a revival of Christ’s gospel is happening in that very part of the world. (If you’re coming to dinner tonight, you’ll hear more about that.)

Who would have thought that the Church could flourish in China? Ethiopia? Kenya? North Korea? Pakistan? Vietnam? Even where the government can be grossly violent against evangelicals, the Church can’t be stopped.

Thank you for bearing with my long midweek teaching series on Islam. Many dimensions of the Islamic threat make us very angry, as they should. But we must deny the “human nature” in us which wants to hate. We can be grieved for our friends in Europe, and deeply saddened by the cultural meltdown across the ocean, but you and I must love. We must love all people, and all people groups, as our fellow image-bearers. That’s God’s image, not our image.

You and I are followers of the Lord Jesus Christ. We’re on a great voyage, accompanied by none other than the King of the Universe. We can see at least some of the threats for what they are, but our trust is in Christ alone.

Our mission is self-sacrifice. Our message is unstoppable grace. All other “messages” are but growlings and roarings.

Aslan gave us our marching orders: “Be just and merciful and brave. The blessing is upon you.”

Posted on April 29, 2016 by garterburn
No Comments