I spent the last couple of days in Houston, visiting my father. Houston is the city of my birth. It was a quick trip, but important to me as Christmas quickly approaches. Yesterday my dad and I had the opportunity to spend a few minutes with his longtime friend, Bill, who is a retired dentist and all-around good guy. I took this pic to capture the moment.

Bill and Dad have been close friends since their years at Lamar High School in the section of town called River Oaks. They went to Texas A&M together, and have been crazed Aggie football fans ever since! Medical school and dental school separated them, but not for long, and they have cheered each other on while watching each other’s children and grandchildren grow up. (To be technically correct, Aggies don’t cheer. They only yell. But that’s another story.) One of my favorite childhood memories was when our two families went to Walt Disney World during its first year of operation. We stayed at the Polynesian Resort (there was no “Village” in its name then), and that was pretty big stuff in 1972! 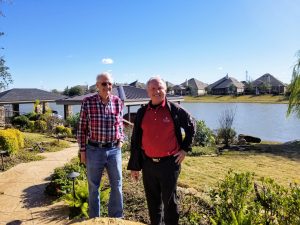 I am grateful to Bill because he has been so faithful. Not only to his beautiful wife, Elena, for many years, but also to us. Because he has been like a rock of support to my family, through thick and thin, he has been an encouragement and blessing from God. In every chapter, he and Elena have “been there” for us. Priceless. Priceless indeed.

Dad and Bill, I pray for you guys lots more visits to Kyle Field.

Not only that, but Christ has shown us the full extent of the Father’s love. On the eve of His crucifixion – on the same night when Jesus washed the smelly feet of His disciples, foretold the denial of Simon Peter, and prayed for unity among “those who will believe in me” (that includes us) – Jesus used the most endearing language possible to describe the likes of you and me. Knowing full well that He would have to die in our place the death which we deserved, He called us “friends” (John 15:14). How can we know that we are God’s friends? That same verse is the key: if we do what Christ commands us to do. We’re saved by faith alone, you see, but not by a faith that is alone. Because real faith expresses itself in real love.

Such grace is nearly unimaginable! The Incarnation of Christ would be followed by His life, death, and resurrection. Wrapped in swaddling cloths and lying in a manger was the power to make us friends with God (Philippians 2:5-11). That glorious night of Christ’s birth was not just a display of God’s power to save, but an angelic declaration of His purpose and pleasure to save as well.

This Christmas, take the time to thank God for the friends in your life. They are rare jewels indeed. Most of all, thank Him for the reconciliation that changed everything! Because of our sin, we were God’s enemies (Colossians 1:21). But because of Christ, we have become God’s beloved and adopted children (Romans 5:8-11; Ephesians 1:5) – His friends.

I’ll quote another good friend, Linus: “That’s what Christmas is all about.”