These days I hear a lot of folks bragging that they “follow the science” – as if nobody else cares anything at all about science. So I thought I would address this today. Please bear with me, friends.

Let me be more specific: a number of people try to make the claim that Christians frame science as a challenge to our faith. In other words, it seems to be the perspective of many public commentators that Christ-followers like to make it our business to dispute, or to disparage, science. I need to point out here and now: that’s simply not true! Science is no enemy of Christianity or the gospel.

Recently you may have seen the popular placard, where “SCIENCE IS REAL” is touted amidst a bunch of other political slogans. In fact I’ll include a picture of one of those yard signs. The subtle message is: “If you don’t agree with my politics, in addition to being generally unenlightened, you’re on the wrong side of science too.” That’s the issue that I want to take up today. 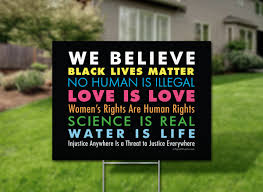 Most Christians are not anti-science at all. But it’s quite obvious that no sensible person can go along with every proclamation which is made in the name of “science.” Were we to do that, we would be changing our belief system regularly, if not daily. (“Give us two weeks to flatten the curve.” LOL.) Let me say it another way: Christians aren’t anti-science, but we are opposed to some things which are advanced under the umbrella of “science.” And we’re not on board with those things simply because they’re largely, if not entirely, scientifically unsubstantiated. And isn’t that a respect for, and the pursuit of, real science? Science is not just a celebration of the latest hypothesis, but it is hypothesis tested by experimentation. As objective observations are made, reasonable conclusions are drawn based upon that which is observed. And repeated. Because “science” has become so politicized – like nearly everything else in our popular culture – we seem to be in danger of abandoning the scientific method entirely.

What many people really want us to do is to accept the theory of evolution as if it were established scientific fact. There’s just one problem with that: evolution is not established scientific fact. Not even close. In fact, evolution can’t even answer the most fundamental question: how did it all start? More than ridiculous is the idea that “it just happened.” It is science that reminds us that nothing can never create something (First Law of Thermodynamics). Create something from nothing? Toward the end of his life, Stephen Hawking decided that it can be done, but only in the quantum realm. I’ll translate that for you: “we don’t know, and you couldn’t understand it anyway, so just trust me.” Check out The Grand Design. You’ll discover there more than you ever wanted to know about eleven-dimensional M-theory. But what you’ll also discover there is that an avowed atheist will set aside science, when necessary, in order to maintain the desired godless worldview. Said Hawking: “Science makes God unnecessary.”

It is not “anti-science” for you and me to stand upon God’s Word, in the sense that we take God at His word regarding how He created the world, and how He created humankind. We may not all agree on some of the finer points regarding Creation, because the Bible doesn’t answer all our questions, but we can all agree that God was there – and that we weren’t! Science can’t answer the questions of origins at all – it’s simply not possible for science to do so – so all we’re doing is looking to the only source of truth which we have available to us: the words of the Creator Himself. I find it ironic that we’re accused of fearing the truth, when in fact we’re seeking the truth. We believe that God is the only one who cannot lie (Numbers 23:19; Titus 1:2). He is the Truth (John 14:6)!