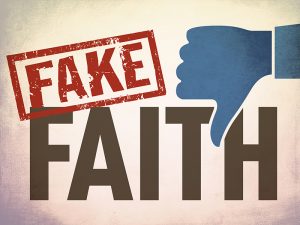 Yesterday I received an Email from one of our church members who relayed a conversation she had at work. In a nutshell, her coworker was talking about “faith,” but it was apparent to our fellow church member that the “faith” being described was suspect at best. Because I believe that this issue of “faith” impacts so many of us who are engaging in the public square, I wanted to share with you an expanded version of my Email response which I penned yesterday. I hope that you find this helpful, as you seek to know Christ and make Him known.

First of all, let me say that our culture largely misunderstands the word “faith.” It’s about as common to misunderstand faith as it is to believe that we become angels when we die, or to believe that good people go to heaven. The workplace conversation relayed to me typifies that.

Let me try to break this down. Many people out there think that “faith” is the goal – as if there were something of value in simply having “faith.”

The Bible presents faith as the means by which we know Christ – so the matter of ultimate importance is Christ, not “faith.” We evangelicals contend for “faith alone” – that was a cornerstone of the Protestant Reformation. Absolutely we do! But what makes faith saving faith is its object: CHRIST! If the object of a person’s faith is not Christ, then there’s not enough faith in the world to merit or produce one thing of value.

Faith is the instrument that God uses to bring us into a saving relationship with Himself. But that does not make faith the basis of our salvation. Faith is merely the channel by which God grants us salvation. B.B. Warfield once said: “The saving power of faith resides thus not in itself, but in the Almighty Savior on whom it rests … It is not, strictly speaking, even faith in Christ that saves, but that Christ saves through faith.”

You can think of our faith as the conduit by which we know Christ, and that’s important to understand so that we never think we’re earning God’s favor by our own works. But that doesn’t make “faith” the object: the object must always be Christ.

Please don’t ever forget this part. Biblical faith has three essential aspects (I’ll include the Latin word for each):

So you can see why we might need to ask more questions when somebody tells us they have “faith.” Faith in what? Faith in whom?

Furthermore, many people today misunderstand “faith” to be nothing more than positive or wishful thinking. The notion is something like this: if you believe it sincerely enough, it’s true. More sincerity equals more faith. Think about how ridiculous that is. No normal person operates under that assumption for five minutes when it comes to determining whether or not the elevator is safe, or what day the tax bill is due.

This is why our culture now demands moral relativism in the area of “religion.” From every corner, we hear cries of: “Don’t you dare claim to tell me – or even claim to know – what is true and what is not!” We have actually come to believe that “he has his truth” and “she has her truth” … and that both “truths” can be true – even when they contradict. Nonsense! We’ve lost our mind, and – as a relatively civilized society – we’re drowning in this stuff.

Again, the weakness is the belief that “faith” in and of itself is where the value lies. The value lies in Christ.

“All it takes is faith and trust.” Wonderful words of Jesus. When did He say that? What’s the verse? Oh … that’s right. That wasn’t Jesus. It was Peter Pan.

So glad that you’re out there sharing THE TRUTH (John 14:6)!