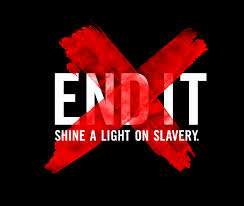 I hope you can join us Sunday for what has become our annual “Shine a Light on Slavery” Day at First Baptist Paducah. Our morning worship service will be dedicated to creating awareness about the global crisis of human trafficking, as well as exploring how Christ’s gospel would have us respond. Sometimes the church is called to action. This is one of those times!

If you’re unfamiliar with why the “END IT” movement exists and is gaining steam, there are four important statistics which I’d be privileged to bring to your attention, based on current estimates from several different fronts in this battle for basic human dignity.

The latest number I’ve seen is 40.3 million in fact. As I write this blog post, that’s how many people – each one an image-bearer of Almighty God – who are being held against their will. If human civilization has a dark underbelly, this is it, friends. I wanted to start with that gargantuan number just in case anyone reading considered this issue trivial or insignificant. The problem is enormous. And assessing the full scope of human trafficking is nearly impossible because so much of it goes undetected year after year. Experts label this “the hidden figure of crime.”

You probably guessed it: money drives this monstrous train. That’s the estimated yearly revenue, globally, that is generated by human trafficking and its multiple criminal tentacles. Now you know why fixing this is no easy task. But we can’t do nothing.

That’s the percentage of modern-day slaves who are women and girls. This crime forcefully exploits women, men, and children. Just as we seek to protect the unborn, we must seek to protect the born. When I was in D.C. with hordes of young adults recently, the thing which most struck me was their desire that the Church apply a consistent ethic to the moral issues of our day.

At least a quarter of all modern-day slaves are children. If that stat doesn’t break your heart, I’m not sure what would. In fact, the average age at which a U.S. teen enters the sex trade is 13. Many victims are runaways who were abused as children. We’re talking about vulnerable children whose very personhood is being steadily eroded by a horrific industry specializing in sin and shame. Surely you and I – as the Lord’s redeemed – are called to care for those around us who are helpless, marginalized, and silenced.

I thought of one more number that may move you.

That’s the percentage of nations where slavery exists, despite the laws against it on their books. And I may be underestimating because the United Nations reports that human trafficking impacts every nation on Planet Earth. When you think about that, even for just a second, it becomes clear that “we wrestle not against flesh and blood” (Ephesians 6:12).

I could use your prayers this week, that I would be able to capture both the heart of the problem and the heart of Christ. Thank you for being the kind of faith community that seeks to apply the saving gospel of Jesus to every sphere of creation and culture.

May Christ be exalted!

Posted on February 6, 2020 by Charles Moore
No Comments