In 2020 we’ll be treated to Top Gun: Maverick – here’s a pic from the new trailer. “Pete ‘Maverick’ Mitchell” is reporting for duty on his Kawasaki Ninja GPZ900R – you may remember the bike from 1986. And don’t say I’m too old to be cool just because I can remember that. Tom Cruise is older than I – and he’s only a little more cool. Anyway, in the film, Pete will be the new flight instructor at the Top Gun school. This time, though, he’ll have to battle drones. 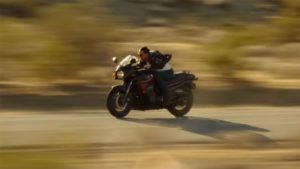 Did they think I wasn’t available to take this role? Honestly. At least they could have called and asked. We could have fully funded next year’s budget for First Baptist Paducah. And beyond. Oh well.

Young adults are leaving our American churches in droves, friends, and the tendency is to conclude: we’re just not trendy enough! Surprisingly, though, recent research indicates that Millennials want “real” over trendy. They don’t want us to be closed-minded – that’s for sure – and neither do the Gen Z’ers right behind them. But younger adults are looking for authenticity. Said differently, if we’re not as cool as Cruise, they don’t want us pretending that we are.

If we can’t explain every connection between the Bible and science, they don’t want us pretending like we can.

If we’re struggling with sin on a daily basis (and who isn’t), they don’t want us acting like we have it all together.

I’ve been thinking about this. Maybe there’s a difference between cool and cool. Maybe “cool” can be cool because it’s truly of value. It’s highly desirable. If that’s the case, then the gospel of Jesus is incredibly cool! In fact, I would go as far as saying that authentic Christianity – lived out among God’s people – is as cool as it gets! This would be the kind of faith walking that includes such rare commodities as truth-telling and forgiveness-offering and coming clean and all the other forms of radical grace that only Christ can do in – and through – us. Totally cool.

One time when Jesus went for a Sabbath meal with one of the top leaders of the Pharisees, all the guests had their eyes on him, watching his every move. Right before him, there was a man hugely swollen in his joints. So Jesus asked the religion scholars and Pharisees present, “Is it permitted to heal on the Sabbath? Yes or no?” They were silent. So he took the man, healed him, and sent him on his way. Then he said, “Is there anyone here who, if a child or animal fell down a well, wouldn’t rush to pull him out immediately, not asking whether or not it was the Sabbath?” They were stumped. There was nothing they could say to that.

Then our Messiah went on to tell the Parables of the Wedding Feast and the Great Banquet. Surely our takeaways would include these: 1) Humble yourselves before it’s too late; and 2) Stop making excuses, but go tell everybody that Jesus is Lord.

Maybe I don’t have to be cool because Jesus already is.

Maybe the coolest me is the me God created, and the me whom God is conforming to His own likeness, in spite of me.

Off to find my Ray-Bans. Pray for me.

4 comments on “Cool as Cruise”