In 2008 I was privileged to trace at least a few of Paul’s footsteps when I got to tour the veritable outdoor museum that is Ephesus, in modern Turkey. In the 10th century B.C., Ephesus was colonized. In the 7th century B.C., Ephesus was attacked by the Cimmerians, but got back on its feet soon afterwards. The 6th century B.C. brought prosperity. Later Ephesus came under the rule of the Lydians, and then under the Persians. In 334 B.C., Alexander the Great captured Ephesus. Ephesus later came under the sovereignty of Rome, and Emperor Augustus declared Ephesus a metropolis. (You can see the inscription in my photograph.) Two thousand years after the man’s reign, I was still struck by the sheer and far-reaching power wielded by the founder of the Roman Empire. 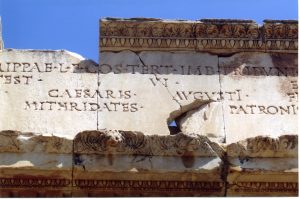 What does it mean to approach a monarch who possesses absolute power? Among other things, it means that you better come by invitation, and that you better enter by permission.

John Newton, who penned Amazing Grace, wrote another hymn that wonderfully describes our approach to God in prayer: “Thou art coming to a King, large petitions with thee bring; for His grace and power are such, none can ever ask too much!”

The writer to the Hebrews said it like this (4:16): “Let us then with confidence draw near to the throne of grace, that we may receive mercy and find grace to help in time of need.”

Why in the world can you and I draw near to the King of the Universe? Because His throne is a throne of grace. May that truth never stop blowing our minds. A throne of grace. Christ’s grace.

How often we pridefully and erroneously imagine God as one who is out to rain on our parade? To clobber us for no good reason. Or to give us what we deserve. And yet in Jesus Christ we have personal access to a Heavenly Father who beckons us to come to Him simply because He loves us with an everlasting love. He wants nothing less than the very best for us, always.

Isn’t that fantastic!?! When you look at prayer that way, God is always saying “yes” to us – but He sometimes simply redirects us to a better “yes” than the one we thought we wanted!

Charles Spurgeon preached in 1871: “We do not come, as it were, in prayer, only to God’s almonry where he dispenses his favours to the poor, nor do we come to the back-door of the house of mercy to receive the broken scraps, though that were more than we deserve; to eat the crumbs that fall from the Master’s table is more than we could claim; but, when we pray, we are standing in the palace, on the glittering floor of the great King’s own reception room, and thus we are placed upon a vantage ground. In prayer we stand where angels bow with veiled faces; there, even there, the cherubim and seraphim adore, before that selfsame throne to which our prayers ascend. And shall we come there with stunted requests, and narrow and contracted faith? Nay, it becomes not a King to be giving away pence and groats, he distributes pieces of broad gold; he scatters not as poor men must, scraps of bread and broken meat, but he makes a feast of fat things, of fat things full of marrow, of wines on the lees well refined.”

“Take heed of imagining that God’s thoughts are as thy thoughts, and his ways as thy ways. Do not bring before God stinted petitions and narrow desires, and say, ‘Lord, do according to these,’ but, remember, as high as the heavens are above the earth, so high are his ways above your ways, and his thoughts above your thoughts, and ask, therefore, after a God-like sort, ask for great things, for you are before the throne of grace, for then he would do for us exceeding abundantly above what we ask or even think.”

“The right spirit in which to approach the throne of grace, is that of unstaggering confidence. Who shall doubt the King?”

Don’t let anything in the world stop you from coming. Coming today.