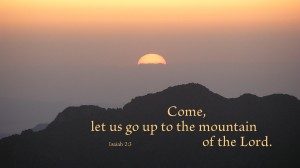 Last night I was captivated by Isaiah 2:1-5.

The Prophet Isaiah, more than seven centuries before the birth of Christ, was sent to warn the nation of Judah – the southern kingdom – that God was very displeased with them. Israel, Judah’s northern neighbor, was being threatened by a growing, aggressive Assyrian military. In a bold political move, Israel’s king joined forces with the kings of Aram (now Syria) to thwart an Assyrian takeover of Israel. This new coalition asked Judah’s King Ahaz to get on board. But Ahaz chose instead to make a deal with Tiglath-Pileser, the king of Assyria. In 722-721 B.C., Assyria overran Israel and dispersed the northern tribes. Judah survived, but at the steep price of having betrayed her own kinsmen.

As this chapter begins to unfold, God’s heart is broken over Judah’s behavior. Remember, Judah is where Jerusalem was located – the city of Solomon’s temple. Isaiah calls Jerusalem and the temple “the mountain of the Lord.” This is God’s mountain, but the people occupying it are acting like they don’t even know God. They’ve made a diabolical deal to serve their own foolish and short-sighted interests. Their selfishness has resulted in war. Tens of thousands are now dead.

If you have your Bible open, go back and read Chapter 1 as well. The displeasure of God over the wickedness of Judah is deep. The Lord is not pleased with the people’s services or their sacrifices, because neither is accompanied by a sincere desire for God’s justice. Nor are the people striving to implement God’s justice when it comes to their own actions. They are not caring for or defending the oppressed, the fatherless, the widows, and others over whom society has trampled. They have grown cold. Their love is gone.

I would point out that Verse 18 is a ray of hope. It’s almost like God just “can’t” dish out bad news without offering the hope of the gospel. I love that about God!

So Chapter 2 contains this new vision …

I don’t know about you, but that sure sounds like good news to me!

Not just because of the events surrounding the Supreme Court nomination of Judge Brett Kavanaugh, but certainly highlighted by them, I don’t have to tell you that our own nation is sorely divided. Is that the understatement of the day? You don’t have to be a dictator or a demonstrator – you don’t have to be a Hutu or a Tutsi, or a Democrat, or a Republican – to be at war with your neighbor. Just look around. Regarding our current American landscape, quite frankly, I don’t think we stand a chance at reconciliation without Jesus.

Without a clear victory of Christ’s glorious gospel in our divided day, there may be no turning back from our national anger.

My only hope is in the mountain of the Lord. There, and there only, do I stand.