A Place To Stand

What is happening in America? That may not be an easy question to answer. Many of us who concern ourselves with Biblical, and particularly Christian, truth are at least somewhat shaken by the increasing secularization of our culture. Upon the 237th birthday of our great republic, we’re mostly discouraged by the steady uptick in moral relativism – which seems always in any context to be accompanied by a gradual (at least) loss of the religious freedoms that our American forefathers attempted to guarantee.

Our U.S. Supreme Court punted the cultural football last week – virtually guaranteeing a train wreck among competing worldviews and their various understandings of “marriage”. Something God defined, and which lies at the heart of human civilization, will be re-defined in our perplexed generation.

A close friend in Chicagoland often reminds me: “Bad times for the nation are good times for the gospel.” I agree with him, though it’s never easy to walk through one of those “bad” times. If we are to be cheered on in days like these, it will likely come to us in the form of a renewed commitment to God’s majesty and glory. 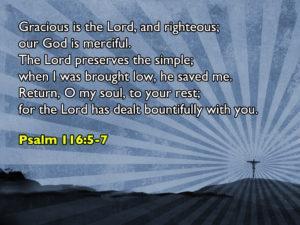 A starting point for such encouragement might be a review of God’s radical faithfulness – to His people, in general,and to us, specifically (Psalm116:1-7). DavidWells in No Place for Truth writes:“We have … a salvation history, an interpreted narrative of God’s acts and redemptive purposes that is as unique as the God in whom it is centered.” Wells goes on to describe how Israel’s Exodus from Egypt is central to our understanding our own journey to the Promised Land. (P.S. I’ll be preaching from Exodus in August.)

Christ has done it!It’s our Lord’s cross where real hope begins to rise in our hearts for times like these. Our hope is not in any of the justices of the Supreme Court or in any other wielder of power of influence in our day, but in the risen and reigning Jesus Christ who is our only firm foundation. “In the beginning was the Word …” (John 1:1). That’s where our real security lies. Nowhere else.

We’re not looking forward to decades of political wrangling or the further wholesale dismantling of values we hold dear. But we’re held in the firm grip of a Savior who knows the end from the beginning. As surely as He rescued those Israelites from their slavery, He stands ready to rescue us.

Cheer up, my beloved brothers and sisters! All is well.

2 comments on “A Place To Stand”